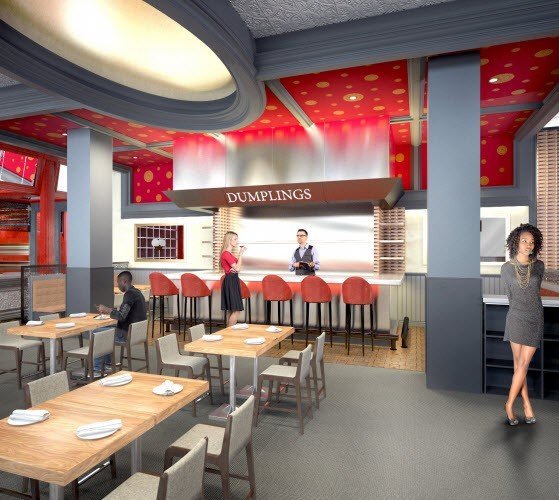 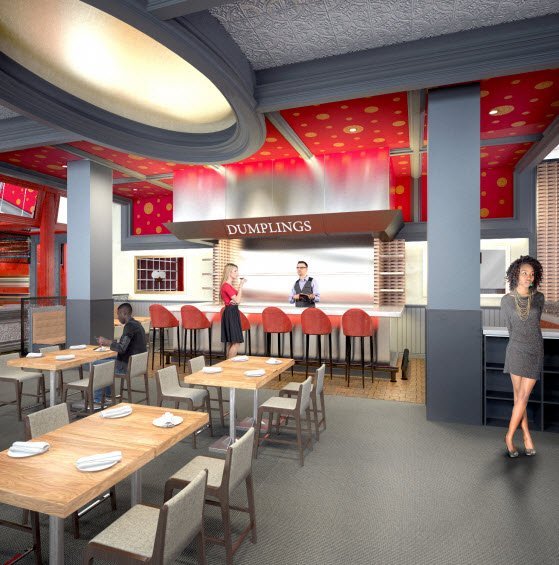 Washington, DC – (February 25, 2016) – Chef Aulie Bunyarataphan and Proprietor Mel Oursinsiri, the dynamic husband and wife team behind a portfolio of the region’s ground breaking Thai restaurants, are proud to announce the return of Bangkok Joe’s. The heartbeat of the “new” restaurant is the much beloved Dumpling Bar,which will serve an expanded selection of hand-crafted delicacies. Exotic tastes and aromas of the Bangkok street food Aulie experienced as a child, along with Japanese, Chinese, Vietnamese and even French flavors she picked up as a result of her culinary experiences in the United States are featured on the restaurant’s expansive menu. The menu includes a large selection of new dishes incorporating more traditional Thai flavors to appeal to diners expanding palates and openness to trying authentic global cuisines as well as customer favorites. The restaurant will open in March in its original location in Georgetown’s Washington Harbour. A new Happy Hour is planned for early summer. When Bangkok Joe’s opened in 2003, it was home to the first Dumpling Bar in the Nation’s Capital. Bangkok Joe’s was open from 2003 to 2014.

“The new Bangkok Joe’s is the restaurant I wanted to open 20 years ago,“ said Aulie. “Over the past decade, we’ve seen customers become more adventurous and more willing to explore traditional Thai ingredients, flavors and cooking styles. I’m really looking forward to doing what I do best, which is sharing my culinary roots. Of course, with my own creative spin.”

The menu will feature a combination of dumplings and buns, wontons and rolls, a variety of small plates, soup and salads, noodle bowls and rice bowls as well as their popular Fried Rice offerings. Not Your Ordinary Joe’s, a selection of elevated entrée specialties, is also back. The Dumpling Bar menu features 20 of Aulie’s unique creations paired with her house-made sauces.

“We’ve heard from so many of our longtime customers that they really missed Bangkok Joe’s.” said Mel. “So we decided to bring the restaurant back, but with a more traditional influence that really showcases authentic Thai ingredients and Aulie’s creativity in the kitchen.”

Collective Architecture in Georgetown oversaw the refreshed design of the interior that pays homage to Thai culture and design.

Final food and beverage menus, along with operating hours, reservations, and special events will be made available closer to opening.

Bangkok Joe’s is co-owned by Chef Aulie Bunyarataphan and restaurateur Mel Oursinsiri, Thai cuisine innovators who are changing the face of Thai food in the Washington, DC region. The restaurant offers traditional Thai cuisine with a modern American twist. Aulie’s innovative dishes incorporate the exotic tastes and aromas of the Bangkok street food she experienced as a child, along with Japanese, Chinese, Vietnamese and even French flavors she picked up as a result of her culinary experiences in the United States. The menu features a new emphasis on traditional Thai ingredients and flavors to appeal to diners expanding palates and openness to trying authentic global cuisines as well as customer favorites. A refreshed interior pays homage to Thai culture and design. When Bangkok Joe’s opened in 2003, it was home to the first dumpling bar in the Nation’s Capital. The restaurant was originally open from 2003 – 2014. In addition to Bangkok Joe’s, Mel and Aulie own T.H.A.I. in Shirlington and Tom Yum District, the first fresh casual Thai restaurant in the Nation’s Capital.  Chef Aulie has been seen sharing her innovative Thai cooking style and dumpling techniques throughout the DC metro area for over two decades. Aulie is a member of the Washington, DC chapter of Les Dames d’Escoffier, a non-profit organization of professional women of high achievement in the fields of food, wine, fine beverages, hospitality and the arts of the table. Bangkok Joe’s is located in Georgetown’s Washington Harbour at 3000 K Street, NW, Washington, DC, 20007. For more information and to make a reservation, please visitwww.bangkokjoesdc.com or call 202.333.4422. Stay connected with @bangkokjoesdc on  Twitter, Facebook and Instagram.

For orders of $30 or more:
Bangkok Joe’s is now offering in-house no-contact delivery. (Minimum order $30; within 3-miles; NO delivery fee). Email us at info@bangkokjoesdc.com or call 202.333.4422 to place your order.

For all other delivery orders:
Please consider one of our delivery partners: UBEReats, DoorDash, and Postmates.