Some of the old Bangkok Joe’s mixed with new items from Bunyarataphan. After operating Bangkok Joe’s for almost 12 years starting in 2003, she and Oursinsiri transformed the restaurant into Mama Rouge, a French-Asian bistro. “It’s not what customers want,” Bunyarataphan said of the now-discarded concept she admitted was too far away from what she knows and loves to cook. Customers ended up missing Bangkok Joe’s, too (she’d make its dishes for Mama Rouge diners by request), so it’s been reborn. This time, though, Bunyarataphan said she’s working more authentic Thai dishes into her repertoire, because she sees that diners are more adventurous these days (see: Little Serow, Alfie’s). Plus, it’s become easier to get her hands on the necessary ingredients. Bunyarataphan is still tweaking the menu, but expect somewhere around 20 new dishes. A fried chicken plate will incorporate inspiration from different regions of Thailand with each of the three pieces. Returning dishes include the fried rice and Panang curry served over noodles. The dumpling bar is coming back as well.

Wine, beer, cocktails and house-made sodas, though Bunyarataphan continues to plan the offerings. Expect Thai herbs to make an appearance in some of the drinks.

After giving the 108-seat restaurant a major makeover in the transition from Bangkok Joe’s to Mama Rouge, expect a less dramatic change in the return to Bangkok Joe’s. The space will be a bit more neutrally colored but still with red accents. “Red is kind of my color,” Bunyarataphan said. The ceiling will sport a pattern inspired by her family temple in Thailand. The dumpling bar, separate from the regular bar, will feature prominently as well. 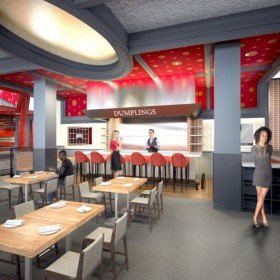 February 25, 2016 - 12:00 am
What’s Old Is New Again As Restaurant Goes Back to Its Thai Roots Emphasis on Traditional Thai Ingredients...